We Need to Teach BlackRock a Lesson on Climate Change

We Need to Teach BlackRock a Lesson on Climate Change

As mothers, we invest in our children every day. We try to keep them safe, healthy, and make sure they have a livable world.


Mothers are coming together to say:
BIG MONEY NEEDS A LESSON ON CLIMATE CHANGE— 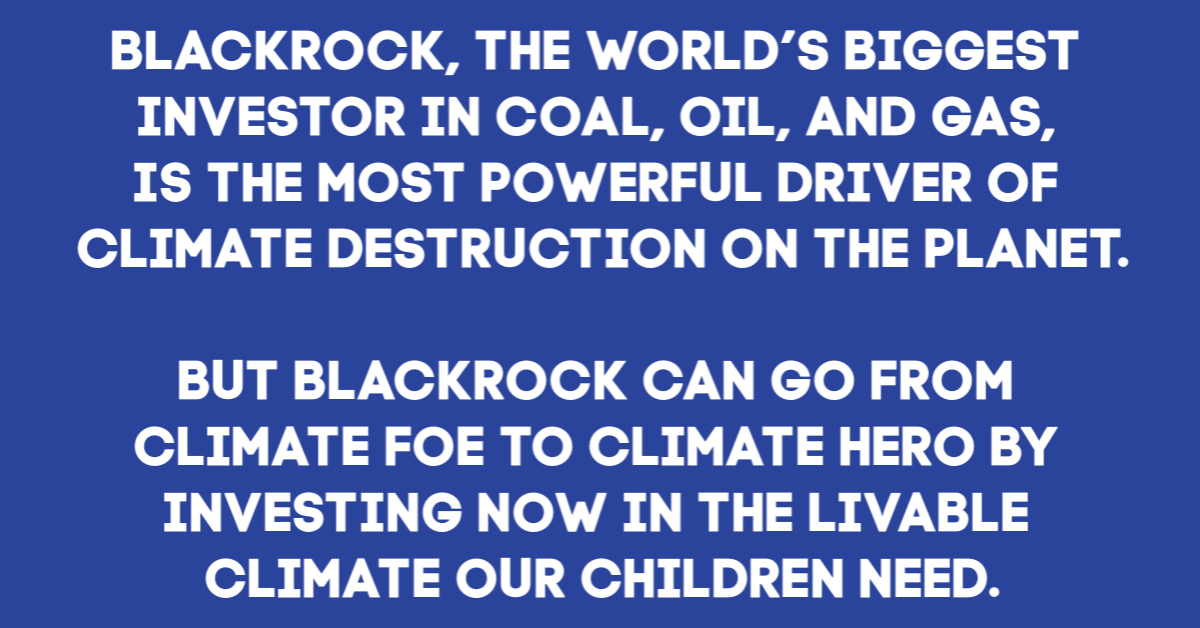 Scientists, the IPCC report, and the Paris Climate Agreement all agree: We have to stop burning fossil fuels now to keep our climate livable. But BlackRock continues to be the #1 global leader on coal, oil, and gas investments when it could be #1 on climate.

BlackRock, do your homework!  The element we need isn’t carbon, it’s renewable energy.

Lost $90B investing in coal—Only 0.8% of assets are sustainable

BlackRock’s huge index funds continue to invest in coal despite the numbers. But BlackRock’s own huge losses aren’t enough to keep the corporation from throwing away money—not to mention our children’s health, safety, and future—rather than building sustainable investments.

Do the math, BlackRock!  You’re putting your bottom line, our retirement funds, and our children at risk.

Supported a climate denier to lead an energy company

BlackRock voted to re-elect a known climate denier, Daniel DiMicco, to Duke Energy’s board of directors to serve on a committee charged with overseeing the company’s sustainability and political influence efforts.

Fails to live up to its own “social purpose”

BlackRock does not act on its own words: “At BlackRock, we have an opportunity, a responsibility even, to make a positive difference to society.” —Larry Fink, Chairman and CEO

Ishares are “engineered for tomorrow” but invest in coal, oil, and gas. 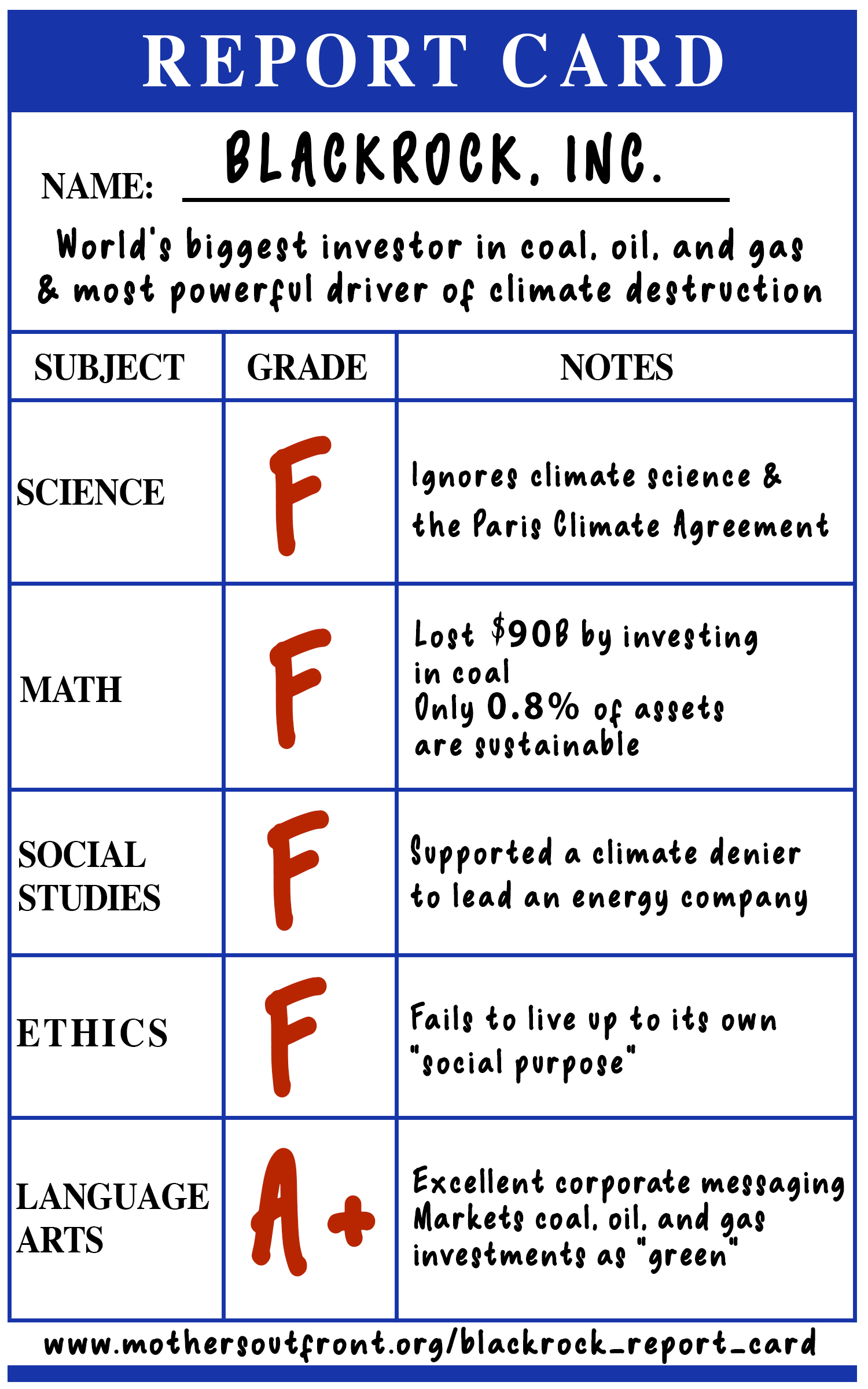 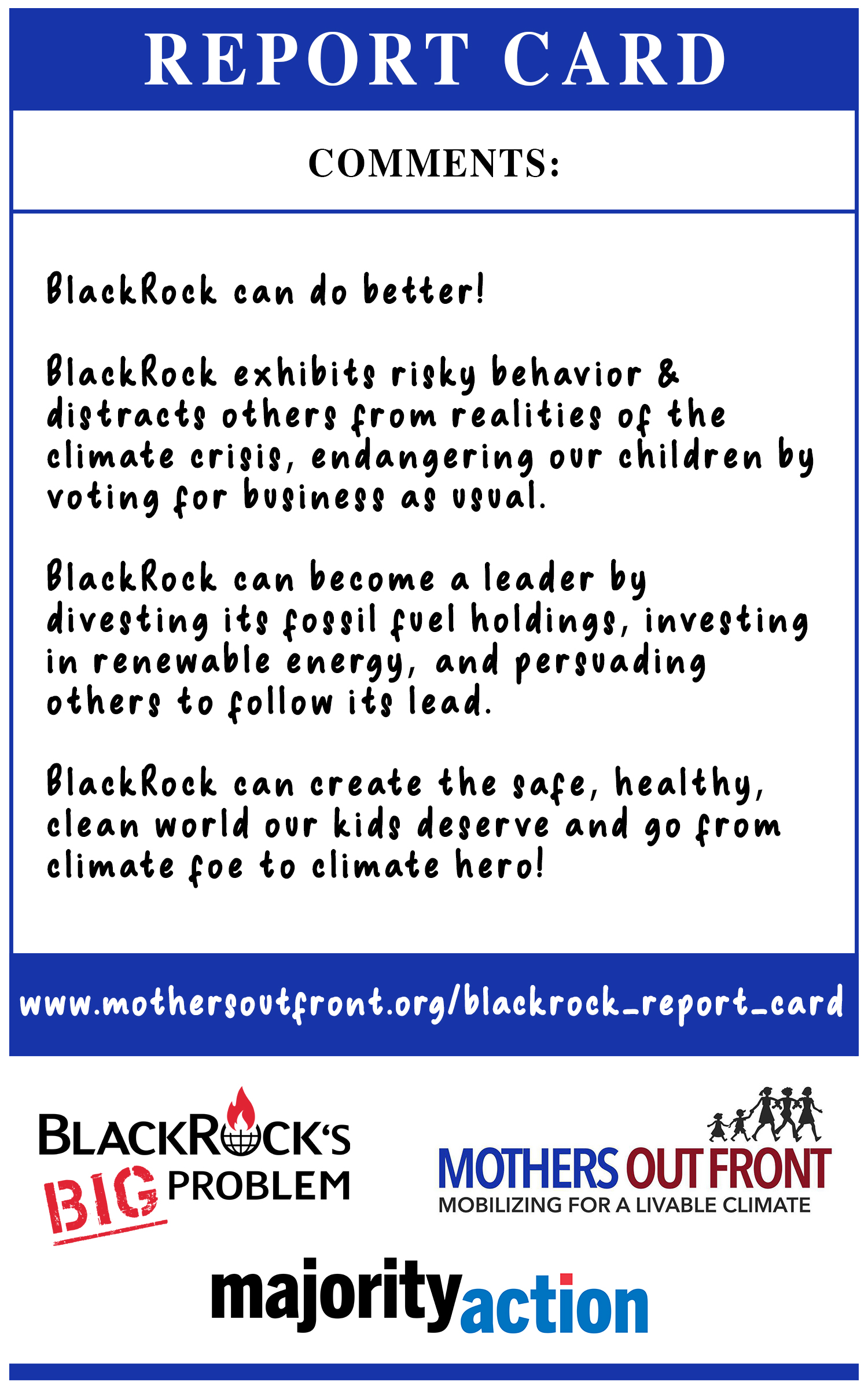 1) BlackRock and Vanguard voted against two essential changes at ExxonMobil that should have created accountability for climate.

In contrast to its peers, ExxonMobil has failed to set greenhouse gas emission targets or even disclose emissions. ExxonMobil also refused shareholder demands to meet with an independent director of the company to press these issues.

In response, Climate Action 100+, a global investor initiative with over $34 trillion in assets under management, backed a resolution to create an independent chair of the board, a critical reform for climate accountability that would put a check on the CEO and board.

That resolution received 41% support from voting shareholders, while 36% backed a resolution calling on ExxonMobil to report its lobbying activity, an essential reform at a company infamous for backing climate denial efforts and that still has major gaps in its disclosures.

BlackRock and Vanguard together control 14.7% of ExxonMobil stock.
If they had voted for these resolutions, they would have passed.


2) The Climate Action 100+ coalition also backed critical shareholder resolutions at carmakers Ford and GM, but BlackRock and Vanguard voted against those as well.

These resolutions called for GM and Ford to enhance disclosure and governance on climate lobbying after it was revealed that the Auto Alliance, a leading automotive trade association backed by these manufacturers, was lobbying to weaken fuel efficiency standards.

BlackRock and Vanguard voted against both resolutions, undermining the efforts of CA 100+ to make the huge car manufacturing corporations accountable.

3) At Duke Energy—the largest greenhouse gas emitter of all electric utilities in the U.S.—BlackRock and Vanguard voted against transparency for the company’s lobbying activity.

36% of Duke’s voting shareholders backed the resolution, but BlackRock and Vanguard, which control 15% of the company’s common stock, voted against it.

BlackRock and Vanguard also voted to re-elect a known climate change denier, Daniel DiMicco, to Duke’s board of directors to serve on a committee charged with overseeing the company’s sustainability and political influence efforts.

At a time when Duke Energy must be undertaking the massive business transformation required to achieve net-zero emissions by 2050, BlackRock and Vanguard continue to give Duke a free pass to continue business as usual.

4) At Dominion Energy, a major investor-owned utility, BlackRock and Vanguard voted against a resolution demanding an independent chair of the board—a critical reform for accountability to long-term investors.

Electric utilities must eliminate greenhouse gas emissions as rapidly as possible, but Dominion leadership has drawn criticism for slowing, not accelerating, its rate of decarbonization.

The company has doubled down on the controversial and potentially uneconomic Atlantic Coast Pipeline project, and Dominion’s lead independent director has longstanding ties to the pipeline project himself.

Despite 40% of voting shareholders and proxy advisor Institutional Shareholder Services calling for an independent chair at Dominion, BlackRock and Vanguard’s major funds both voted against it.

BlackRock and Vanguard together own over 12% of Dominion’s shares—meaning if they supported the resolution, it would have passed.

BLACKROCK IS DRIVING THE CLIMATE CRISIS.
BUT MOMS ARE HOLDING BLACKROCK ACCOUNTABLE.

As in past years, BlackRock continues to be a driving force behind the climate crisis.

At 9am on September 17, 2019, our partner Majority Action released its 2019 Asset Manager Climate Scorecard that analyzes these critical climate shareholder votes and shows how leading asset managers torpedo necessary measures to address climate change and protect our children.