We knew it was a good sign when City Council’s President Michelle Wu presided over the Community Choice Energy (CCE) hearing with her baby in her lap. Climate change and its threats seemed more urgent with one of the youngest  members of our community sitting on her lap. Clean energy advocates, including over twenty Mothers Out Front mothers - some with their own children by their side - packed the large room to demonstrate support for CCE. A day later the Boston City Council voted unanimously to implement it! CCE allows Boston to purchase 5% more clean energy than the state-mandated minimum. Over 200,000 households and small businesses will have access to clean energy without having to do more than just switch on their lights. 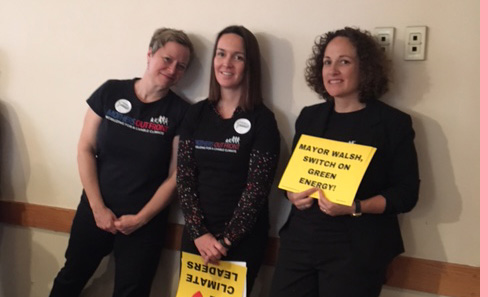 Boston Climate Action Network (BCAN) spearheaded the advocacy campaign to pass CCE (also known as Community Choice Aggregation) in Boston. Leading up to the hearing, the Jamaica Plain (JP) Mothers Out Front (MOF) group worked with our ally BCAN, regularly participating in monthly meetings and phone calls. Members of JP MOF also met in small groups with local and at-large city councilors to solicit their support for CCE. Our members sent letters to city councilors and tweeted, called, and emailed the Mayor to foster his support.