I Don't Want to Wonder; I Want to Know

I am a mother from Auburn, Alabama and since moving here two years ago, I became a leader in organizing the first team in Alabama for Mothers Out Front. Recently my six year old daughter and I visited Washington D.C. with my husband Dr. Martin Medina Elizalde, a Paleoclimatologist at Auburn University. We were fortunate enough to attend a session that he and his colleagues were hosting at AGU 100 2018 (American Geophysical Union), in which Dr. Katharine Hayhoe was invited to be the main speaker. She is a prominent climate scientist, one of the lead authors that published the Fourth National Assessment on Climate, and I did not want to miss this talk!

A few days earlier, before she arrived at the convention center, she offered a virtual talk for another session at AGU where she was broadcasted in live from Norway. She had just taken part in the 2018 Nobel Peace Prize Forum Oslo at the University of Oslo, Norway, where she joined other world leaders to discuss climate science, policy, and solutions. Now she was here in AGU, in person, offering her talk on “Drought in a Changing Climate: Connecting the Dots Between Scientists and Stakeholders” hosted by my husband and his colleagues from AU. To me this was a perfect illustration of her dedication to the dissemination of knowledge on the subject of Climate Change. It felt like magic when she showed up in that convention room. 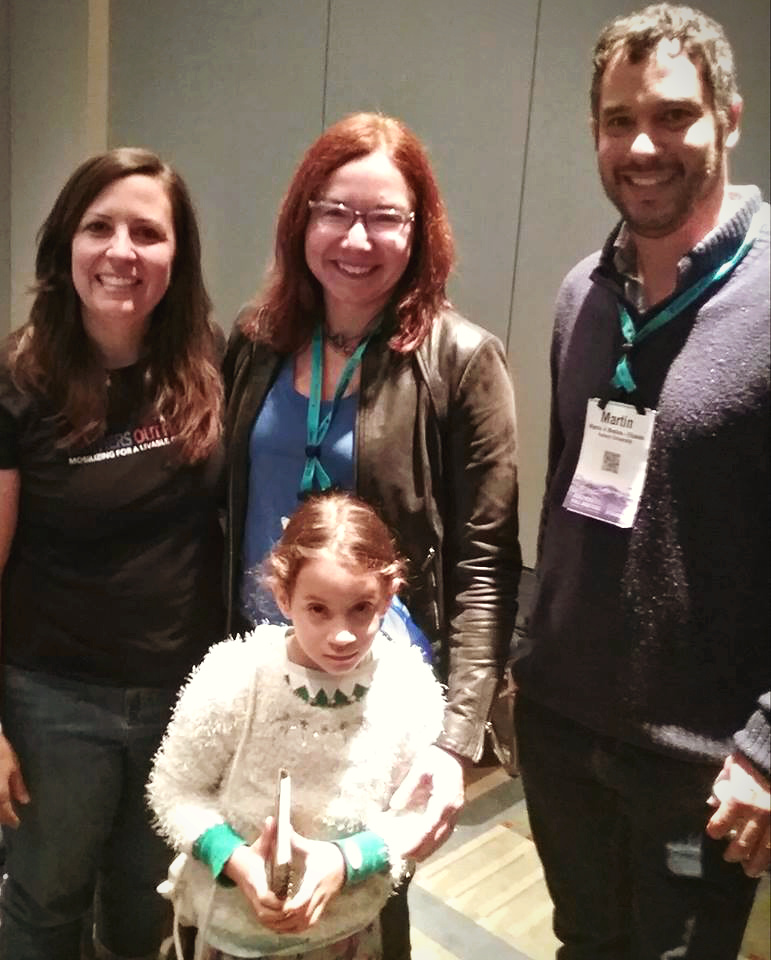 My husband and colleagues hosted several lectures on hydrology and climate change, during which time my daughter and I were able to be in the room for a few of them leading up to Katharine’s talk. While my daughter drew her “graphs” of changing climates (based on the screen projections) on the back of a NASA poster, I did my best to absorb information. These select scientists were explaining the results of their work and its implications. Then came Katharine’s talk. I found that it didn’t take long to understand what she was conveying. Either I’m getting smarter or she used just enough non-scientific terms for me to grasp the message. What I walked away with was affirming. I was ignited into action. Climate change is affecting our lives in ways we have yet to come to terms with, the severity is real and now is the time to address it, this minute. I sensed her genuine concern for what was taking place in the state of Texas which obviously extended beyond, as seen by her ongoing tireless commitment to communicate with decision makers and world leaders around the world…and this resonated with me. That is why I joined Mothers Out Front in the first place. This is why I want to do something about mitigating climate change, and I want to do it now.

I don’t want to wonder, I want to know what kind of future I will be leaving to my sweet girl, my little scientist, creative dancer, my storyteller extraordinaire. I want to know that I am leaving her a viable livable habitat for her and her sweet friends. As mothers, as people, it is so important to do the work we do. The heart of the matter is, we must rise. It’s not just smoke and mirrors on the horizon, its climate change, and it’s real.