IN THE NEWS: Please see the joint press release with images from FracTracker, Fossil Free Tompkins, Mothers Out Front NY and The Sierra Club about our event on July 12th at the Tompkins County Library.

You can also see a live stream of some of the speakers here:  https://www.facebook.com/MOFFingerLakes/

Anyone who wants to sign up for the bus to the July 24th DEC hearing in Avon should sign up here: 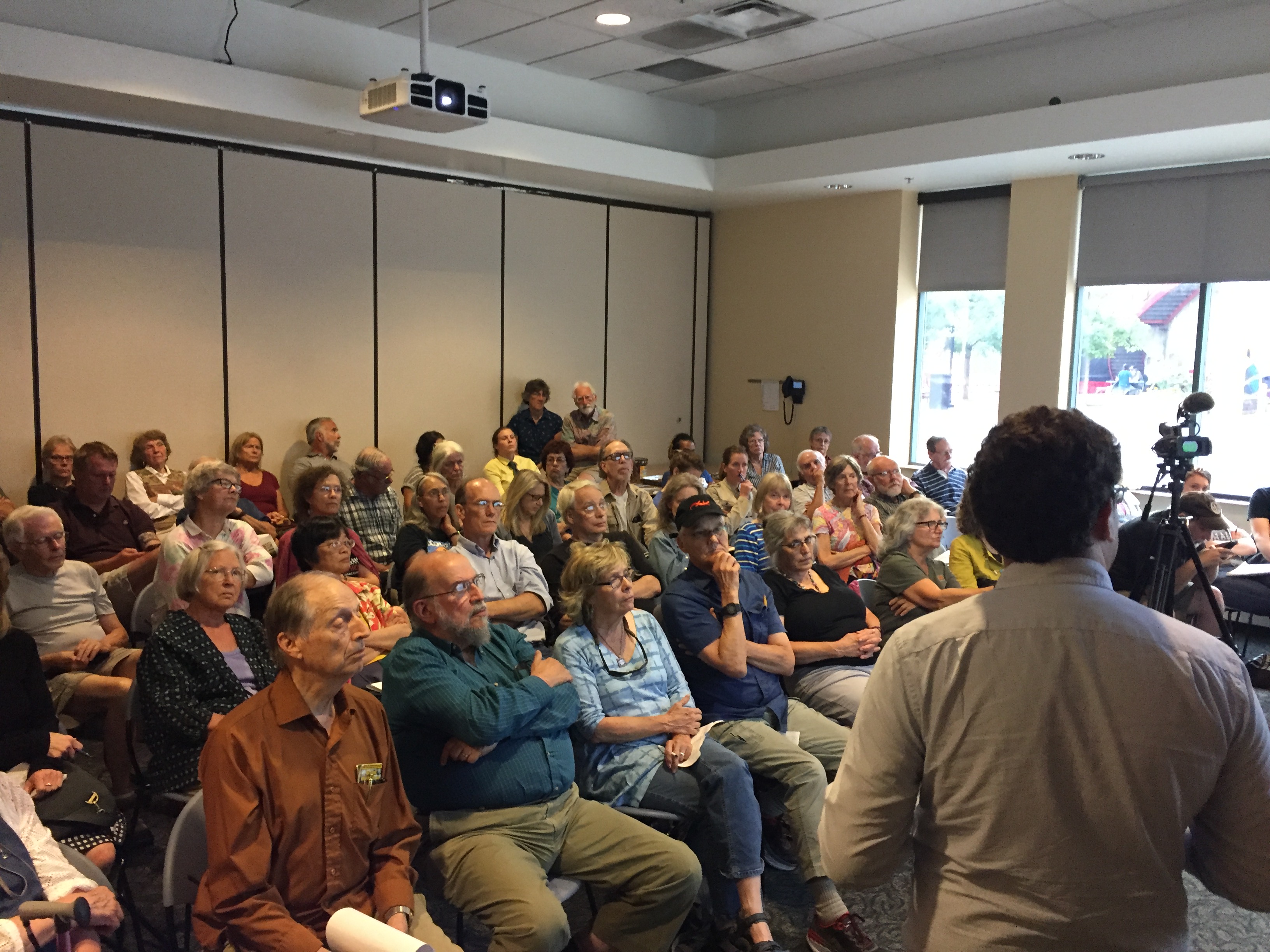 There was an overflow crowd in the Borg Warner Community room at the Tompkins County Library last night as more than 70 concerned citizens turned out to hear experts and advocates speak on issues related to the proposal by Heorot Power Holdings LLCto re-power the Cayuga Power Plant with fracked gas.

The mood of the attendees was jubilant as surprise guest Dr. Sandra Steingraber kicked off the meeting with the announcement that Crestwood’s proposed LPG storage at Seneca Lake had been defeated once and for all following an announcement yesterday that the NY Department of Environmental Conservation (DEC) denied the permits on the basis of “community character.” Steingraber told the crowd, “Now we are turning our attention from the shores of Seneca Lake to a dangerous fossil fuel project menacing our beloved Cayuga Lake. Let this good news from the DEC today serve as wind in our sails. When we fight, we win.”

Irene Weiser, coordinator of Fossil Free Tompkins, one of the power plant’s long-standing opponents, gave an overview of the history of the plant saying “This is a dangerous, old, inefficient, polluting, global-warming power plant, and converting it to burn gas instead of coal will not change any of that. This plant needs to be closed down, and its toxic site remediated.”

Karen Edelstein of the FracTracker Alliance who lives in Lansing presented a map of the possible truck routes through Tompkins County showing the schools, day-care centers, and health care facilities along the truck route. (See below.) 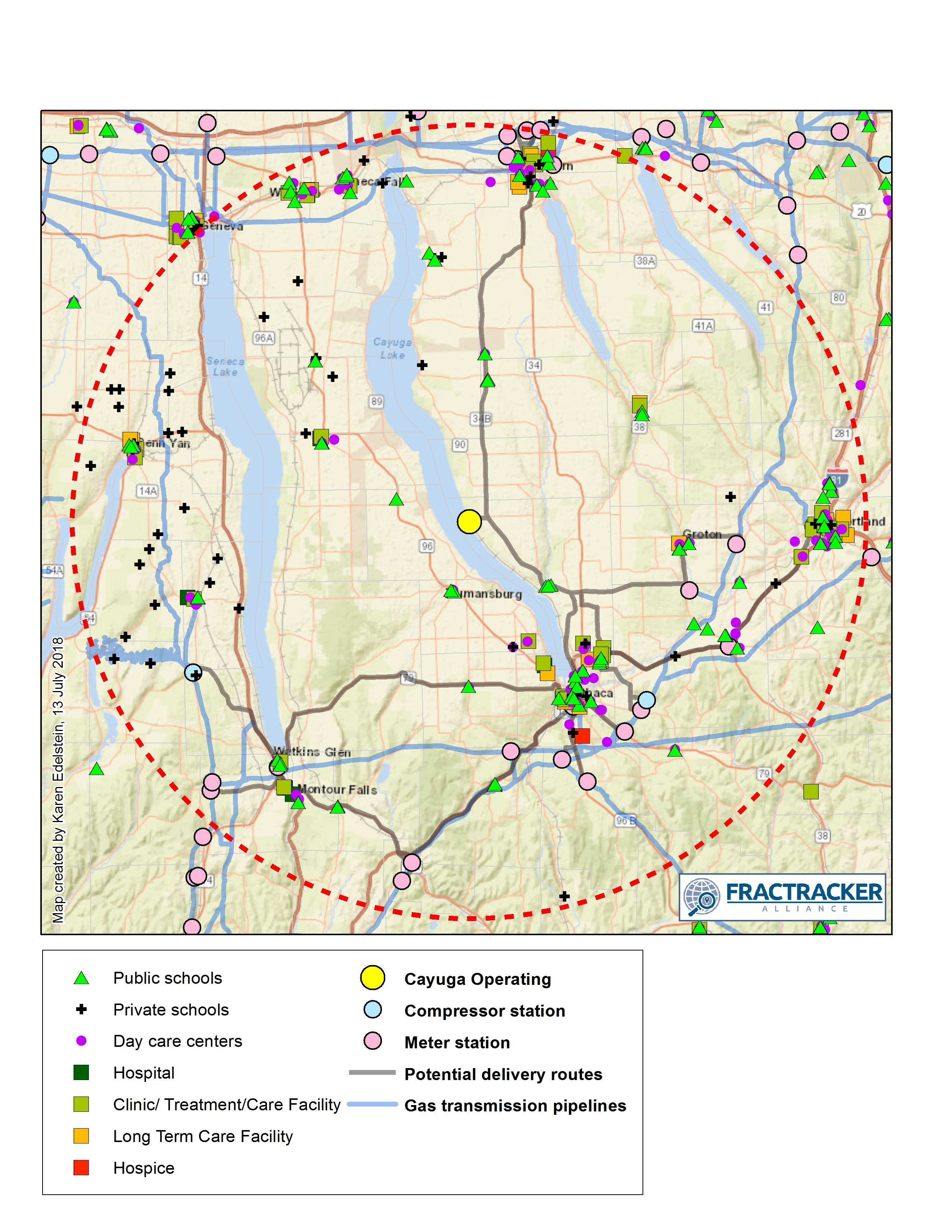 “The proposal for repowering includes delivering the gas by truck, an estimated 25-60 trucks each carrying compressed natural gas (CNG) per day. But, simple physics tells us that it all depends on how often the plant is running,” said Tony Ingraffea of Cornell University. “It could easily be more than 100 trucks each day.” Ingraffea went on to explain the climate impact of using methane gas as fuel, telling the audience that due to the warming impact of methane that leaks to the atmosphere, the total emissions are as if you burned the gas twice.

“I am the first person in my family not to live on an Island” said David Alicea Sierra Club’s NY Lead Organizer referring to his Puerto Rican roots. “I do this work because every day climate change directly affects the people I love.” Alicea explained that the DEC’s newly proposed Power Plant Pollution Protections have the opportunity to ensure that the least efficient plants, like Cayuga, fully retire. Alicea urged Tompkins County residents to demand a strong final rule at an upcoming DEC hearing on July 24th in Avon NY. The Sierra Club is providing a free bus from Ithaca for those would like to attend.

Closing out the meeting was Lisa Marshall a regional organizer for the non-profit climate advocacy group Mothers Out Front. “I wrote my first paper on climate change when I was 16 years old and this year I turned 50,” said Marshall “during all that time, our government has utterly failed to take substantive action on climate change. As you’ve heard tonight, the science is clear, gas in an unacceptable alternative to coal.” Marshall, who supports teams of mothers and grandmothers to do community organizing locally, told the crowd that building grassroots power was the one thing that could defeat the power plant. Pointing to the news from Seneca Lake, Marshall said, “We have the science and the people power on our side. If we work together strategically we can win.”

Anyone who wants to sign up for the bus to the July 24th DEC hearing in Avon should sign up here: